Reigning Olympic champion Laura Ludwig and partner Maggie Kozuch won their first match at the Tokyo Games on Monday, a day that saw as many seven European teams emerge victorious at the Shiokaze Park Stadium.

Ludwig and Kozuch, who had lost their Pool F opener to Swiss Nina Betschart and Tanja Hüberli on Saturday, bounced back with a 2-0 (21-17, 22-20) victory over Japanese Miki Ishii and Megumi Murakami.

“Right now, actually it's a relief, that we won and that we are second in our pool,” Ludwig said. “We knew that the Japanese can definitely play, they're very skillful and they serve really good. But this was also their first game on the center court so I guess they were nervous.”

Betschart and Hüberli didn’t have to sweat to secure their second victory in Tokyo as their Czech opponents Marketa Sluková and Barbora Hermannová couldn’t be on the court due to a positive COVID-19 result and had to forfeit the match. 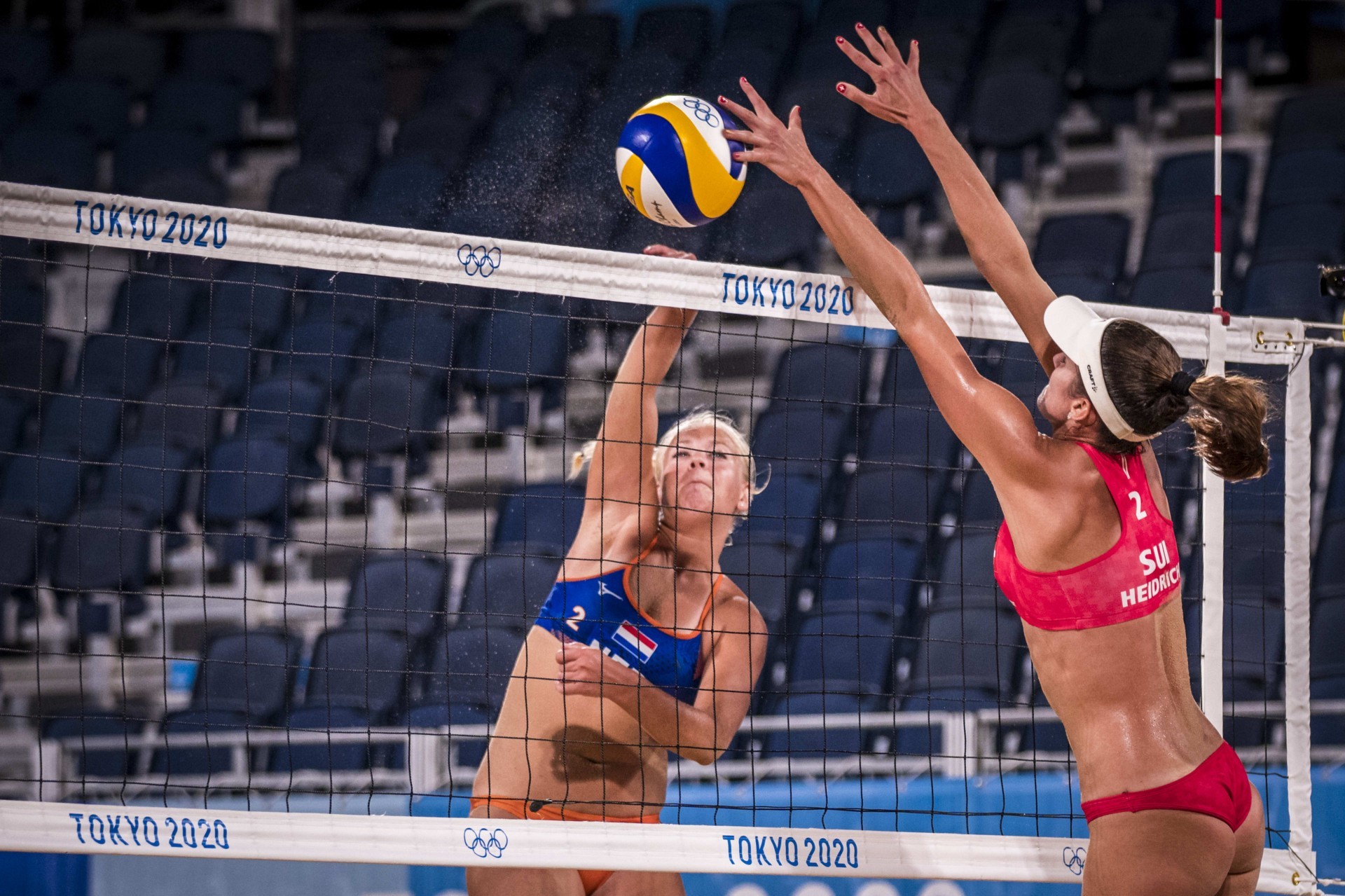 Pool A had three European teams in action and Swiss Joana Heidrich and Anouk Vergé-Dépré reached their second win in Tokyo by prevailing over young Dutch Katja Stam and Raisa Schoon in two sets (22-20, 21-18). Germans Julia Sude and Karla Boger fell to Canadians Sarah Pavan and Melissa Humana-Paredes also in two sets (17-21, 14-21) and had their second setback in the Olympics.

Latvians Tina Graudina and Anastasija Kravcenoka were the last women’s team from Europe to debut in Tokyo and they lost their Pool D opener to Americans Kelly Claes and Sarah Sponcil in three sets (13-21, 21-16, 11-15). 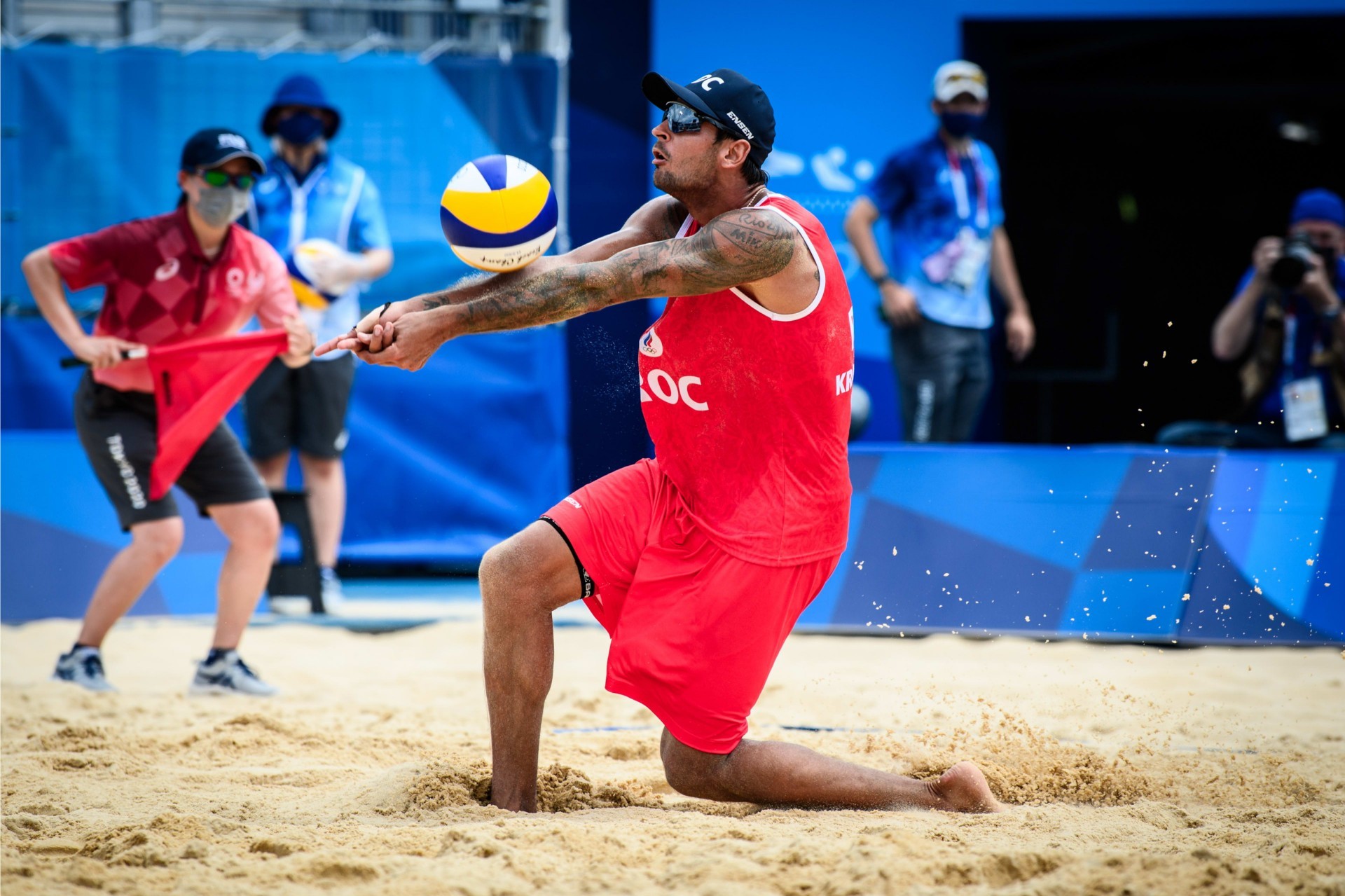 On the men’s side, reigning world champions Oleg Stoyanovskiy and Viacheslav Krasilnikov of Russia recovered from a slow start to come from behind and defeat Mexicans Jose Rubio and Josue Gaxiola 2-1 (24-26, 21-15, 18-16) in their debut on Pool B.

“They have a special technique, not a strong one, but a smart one,” Krasilnikov said about the Mexicans. “Our plan was to make a lot of good serves. The third set was really intense, and it was a really long match. We were really ready for this match, and that’s why the result is this.”

Latvians Martins Plavins and Edgars Tocs secured a victory by forfeit on the same pool as Czechs Ondrej Perusic and David Schweiner couldn’t compete due to a positive COVID-19 result.

On Pool A, three-time EuroBeachVolley champions and world ranking leaders Anders Mol and Christian Sørum of Norway won their second match in Tokyo as they downed veteran Spanish Pablo Herrera and Adrian Gavira 2-0 (21-17, 24-22).

They will challenge Russians Konstantin Semenov and Ilya Leshukov, who are also undefeated after their straight-set (21-14, 21-16) win over Australians Christopher McHugh and Damien Schumann, for the top spot of the pool on Wednesday.