With three Germans teams in it, the women’s quarterfinals of the A1 CEV EuroBeachVolley Vienna 2021 presented by Swatch are now set and will reunite duos from five countries in contention for continental glory.

Chantal Laboureur and Cinja Tillmann are among the German teams qualified after they defeated Austrians Lena Plesiutschnig and Katharina Schützenhöfer in straight sets (21-15, 21-17) and knocked the last home team standing out of the tournament.

“We did pretty well in the first set but in the second the Austrians have put a lot more pressure on us with their serves and made us work a lot harder for every point,” Tillmann said. “Fortunately, we stepped up our game and managed to put pressure on them near the end and win it. It was a very interesting second set and I hope Austrian fans enjoyed it, even though the home team lost.” 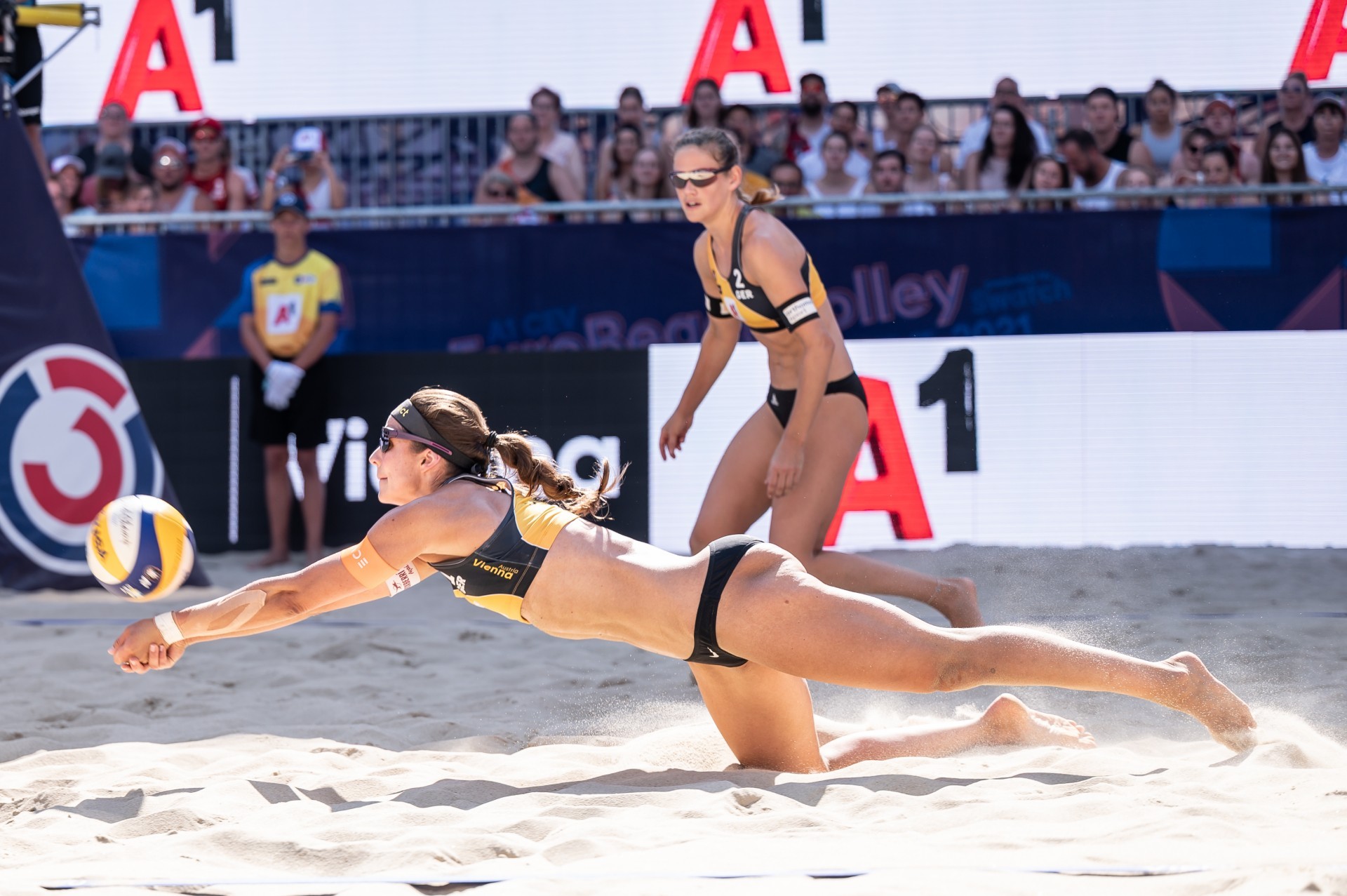 Laboureur and Tillmann in action against the Austrians

Guaranteed a top-five finish in Vienna, Laboureur and Tillmann have an interesting dynamic as a team as they aren’t regular partners and have played alongside multiple different players this season. When together, though, they usually do well, as they did in a World Tour four-star event in Cancun in April, when they finished fourth.

“It’s a pretty amazing result for us,” Laboureur added. “We’ve played together in a few tournaments this season and it worked out well in most of them, but we still try to go in to every match with no expectations. It’s great to be in the quarterfinals, but we still want to go further.”

In the quarterfinals, the Germans will meet Tokyo Olympic semifinalists and 2019 EuroBeachVolley winners Tina Graudina and Anastasija Kravcenoka of Latvia, who downed Czechs Barbora Hermannová and Marie-Sara Stochlova in straight sets (21-17, 21-18) in their Round of 16 match.

Germans Victoria Bieneck and Isabel Schneider also made it to the quarterfinals with their 2-0 (21-13, 21-15) win over the Ukrainians twins Inna and Iryna Makhno. Their opponents will be Tokyo Olympians Raisa Schoon and Katja Stam, who came out on top of an all-Dutch duel with Marleen van Iersel and Pleun Ypma with a two-set (21-16, 21-15) victory.

The German lineup in the quarterfinal will be completed by Tokyo Olympians Julia Sude and Karla Borger, who needed all three sets (21-12, 15-21, 15-11) to top Swiss Esmee Böbner and Zoé Vergé-Dépré, and will now face Russians Svetlana Kholomina and Ksenia Dabizha, who prevailed over Spanish Maria Carro and Paula Soria also in three (20-22, 21-17, 19-17).

Sandra Ittlinger and Kim Behrens were the only German team stopped in the Round of 16 as they fell to 2018 EuroBeachVolley champions Sanne Keizer and Madelein Meppelink of the Netherlands, who prevailed in two sets (21-17, 21-15). In a rematch of the tournament’s final of three years ago, the Dutch will clash with Swiss Nina Betstchart and Tanja Hüberli, who downed Polish Kinga Wojtasik and Katarzyna Kociolek 2-0 (21-17, 21-13).

The quartefinals will happen later on Friday while the semifinals and medal matches will take place on Saturday.