In the second duel of the men's teams of the second match day Italy and Poland met on the court of the Red Bull Beach Arena. For both nations, the second seeded teams started the first match. Playing for Italy are 34-year-old Adrian Carambula and 29-year-old Enrico Rossi. Their Polish opponents are 29-year-old Maciej Rudol and 30-year-old Piotr Kantor, who finished third at last year's European Championships in Vienna. 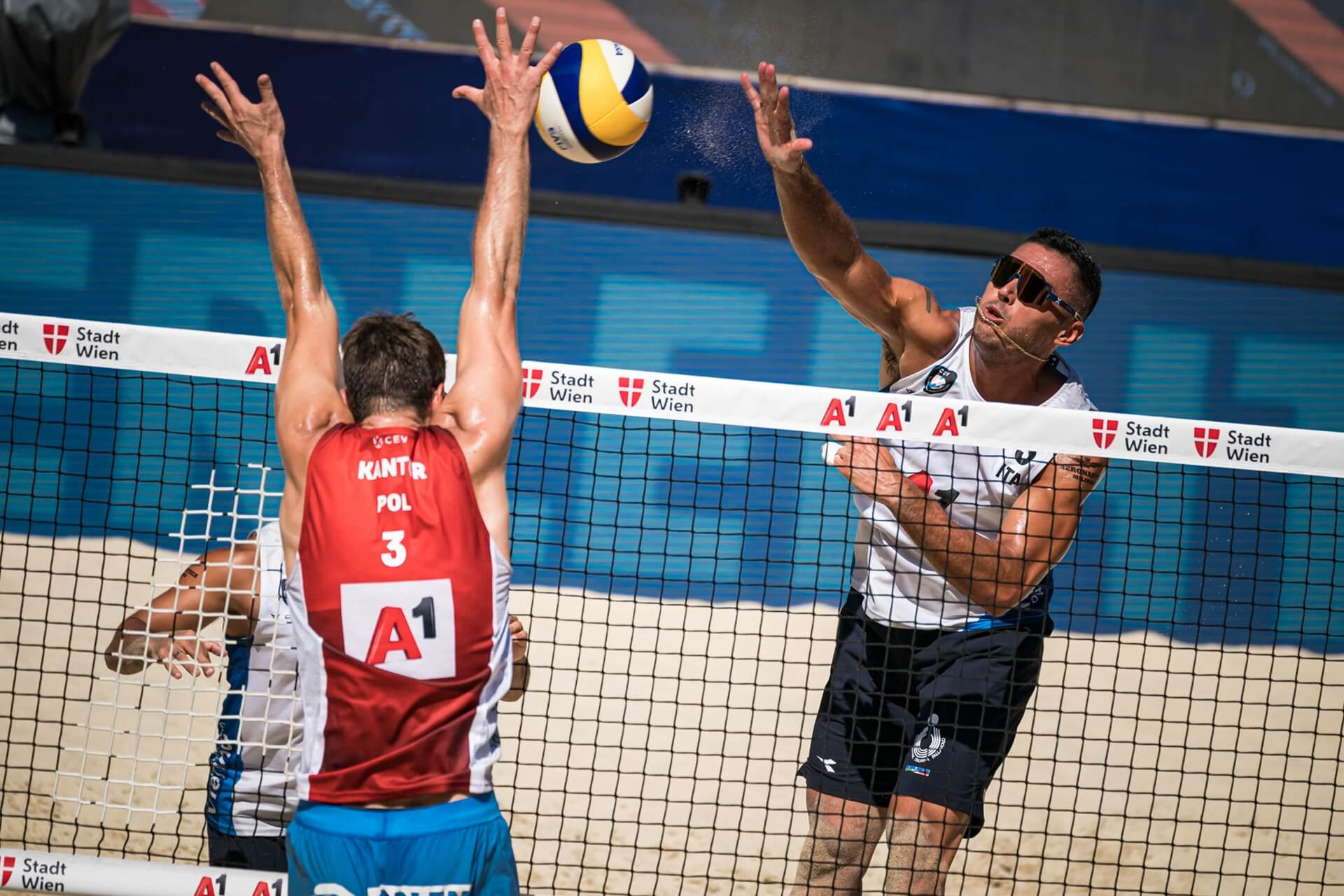 Already in the first set, the Italian team had a neck-and-neck race with the Poles. It was a strong performance of both nations, characterized by many rallies. The Polish duo led at the beginning, but Italy managed to equalize with a subsequent change of the lead. Poland tried to fight back and could also make up some points, but in the end lost to the Italian team with 17:21. 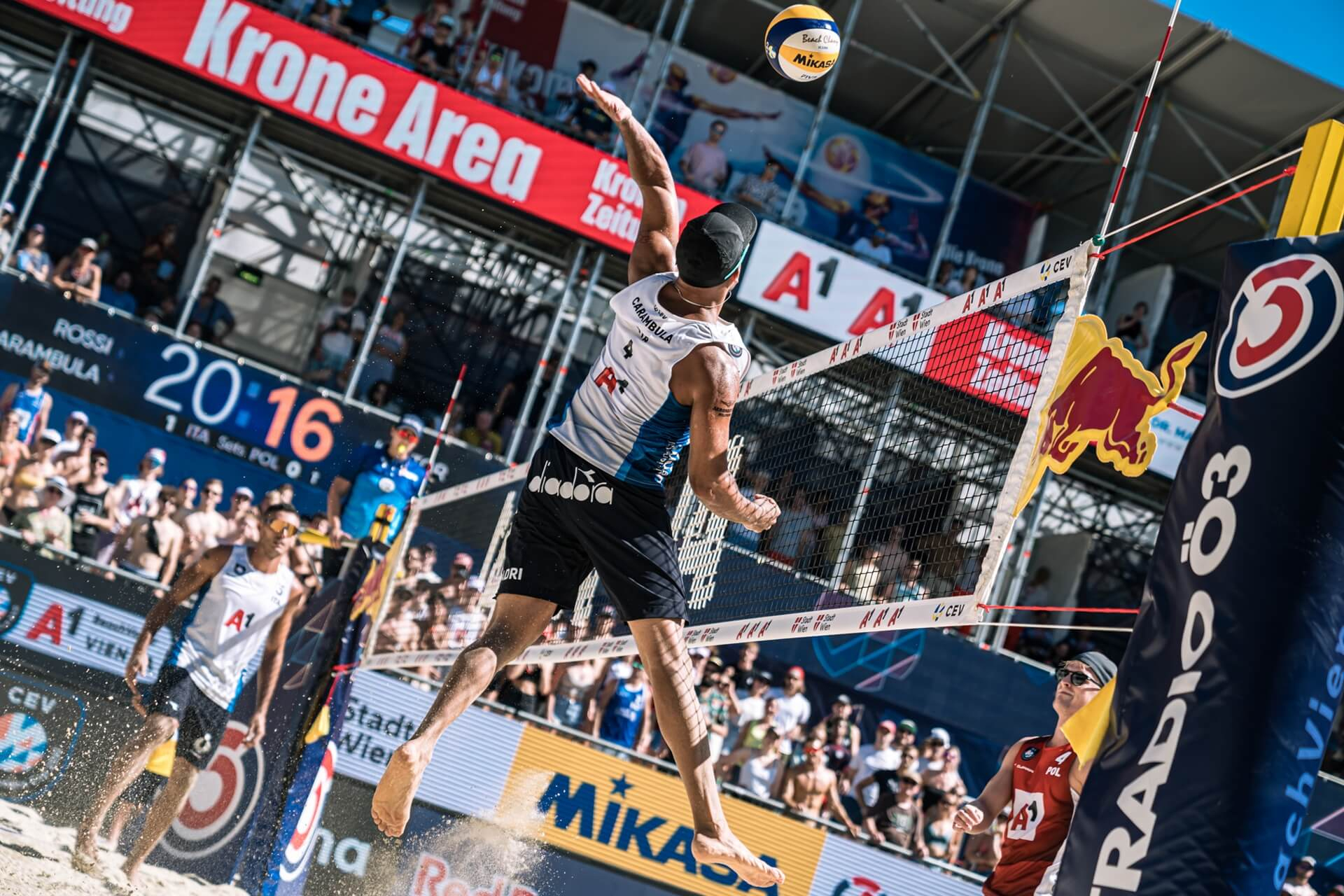 At the beginning of the second set there was a moment of shock - Enrico Rossi collided with his Polish opponent at the net. After a short break, both players returned unharmed. Both Poland and Italy showed a game on a very high level, as in the first set. In the decisive moments, however, the Italian team had the better tactics and also secured the second set with 21:16. Italy thus won the first match 2:0. 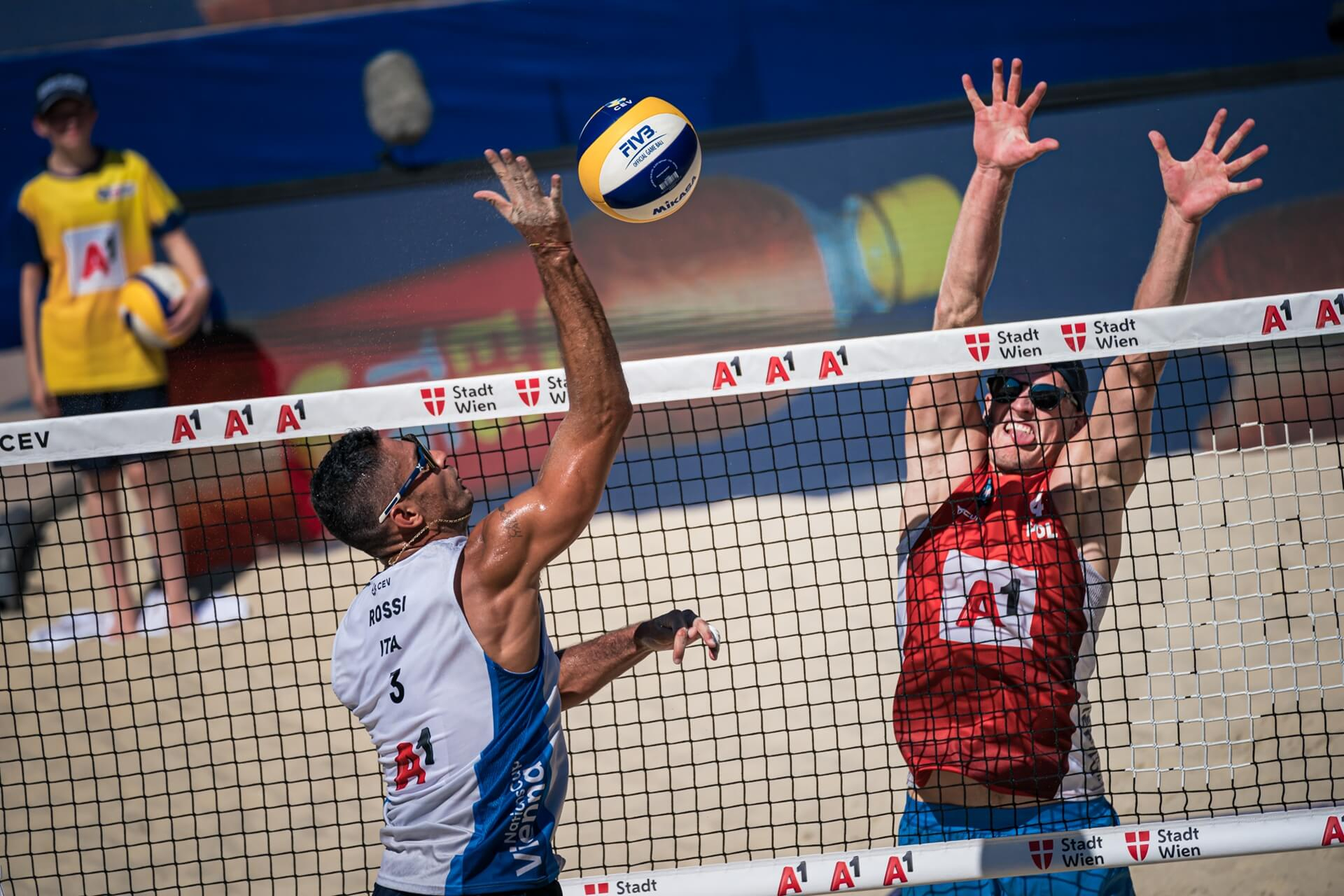 In the second match, the top seeded teams of the two nations met. With 23-year-old Samuele Cottafava, who already won the Elite 16 in Jurmala in 2022, and 33-year-old Paolo Nicolai, fifth at the 2021 Olympic Games, the Italian elite in this sport was on the court. They now had to prevail against 27-year-old Michal Bryl and his 30-year-old playing partner Bartosz Losiak from Poland, who won both the Challenge Tlaxcala and the Challenge Doha in 2022.

The beginning of the first set also gave hope for a promising match. However, after the first points, the Italian team showed to be prone to mistakes. Poland was without question the better team and wins the first set 21:12.

The duo Cottafava/Nicolai managed a better start into the second set. Italy fought for every point and tried everything against the outstanding technique of the Poles. However, the Italian team made mistakes on serve in the second set as well and gave away some points to Bryl/Losiak. However, it is the will to win and the fighting spirit of the Italians that helped them to make up points, equalize and finally secure the second set with 23:21. 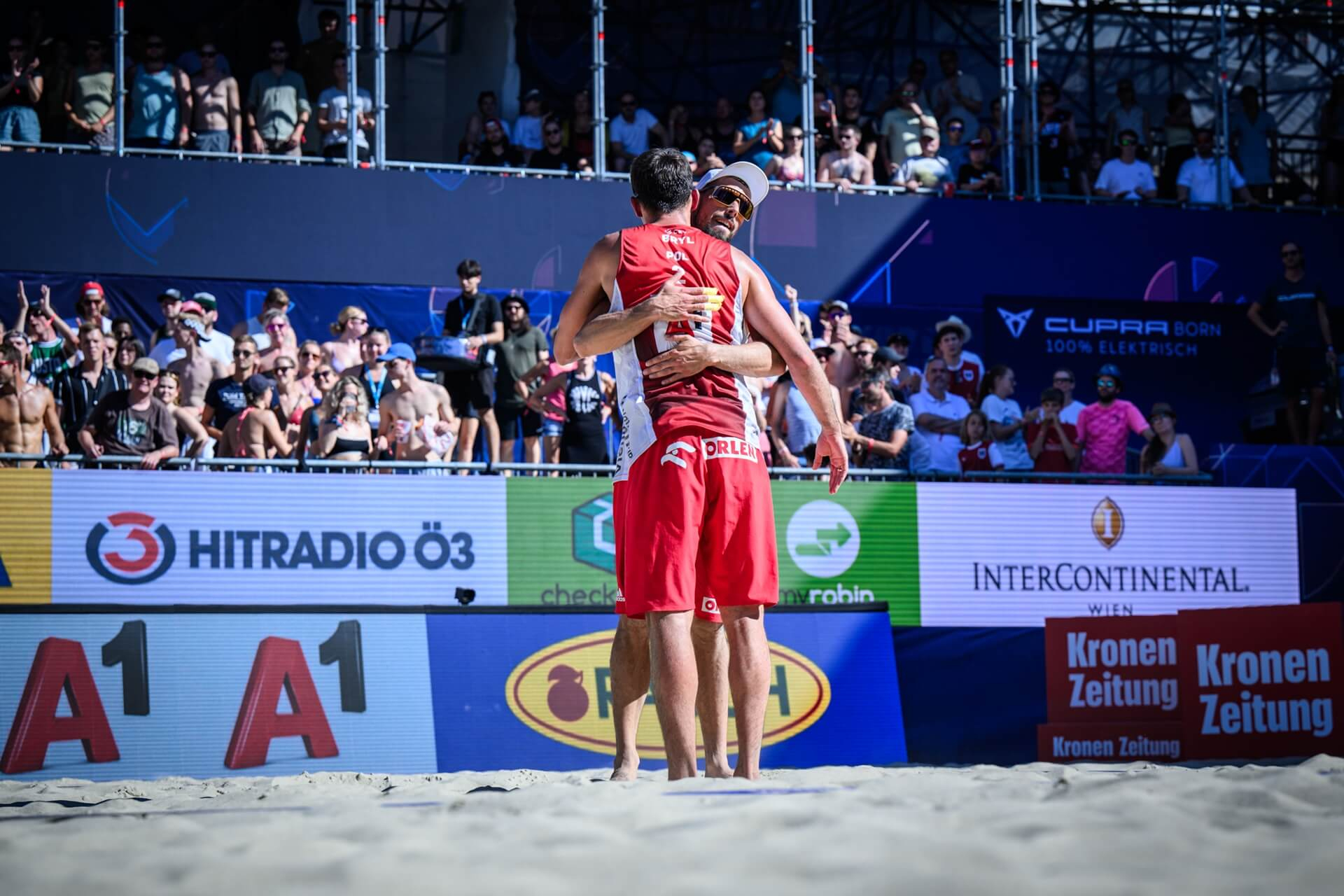 The third set showed the high level of play of the two teams, it was a match at eye level. At the decisive moment, Italy made a mistake and gave away the third set 11:15 to the Polish team, who won the second match 2-1.

The Nations Score showed a result of 1:1, so it went on to the Golden Set, where only 15 points have to be scored. The coaches decided to play their two teams from match two - so it was Cottafava/Nicolai vs. Bryl/Losiak once again. The Polish duo started well into the match, but played sloppy as the match progressed. Italy took the lead and scored a few points. Bryl/Losiak were not discouraged by their deficit and caught up. The match came to an equalizer. The two nations offered the numerous spectators an exciting match, characterized by several lead changes. In the end, Samuele Cottafava and Paolo Nicolai from Italy won the Golden Set 19:17. The Nations Score for the Italian men's team is now 2:1. 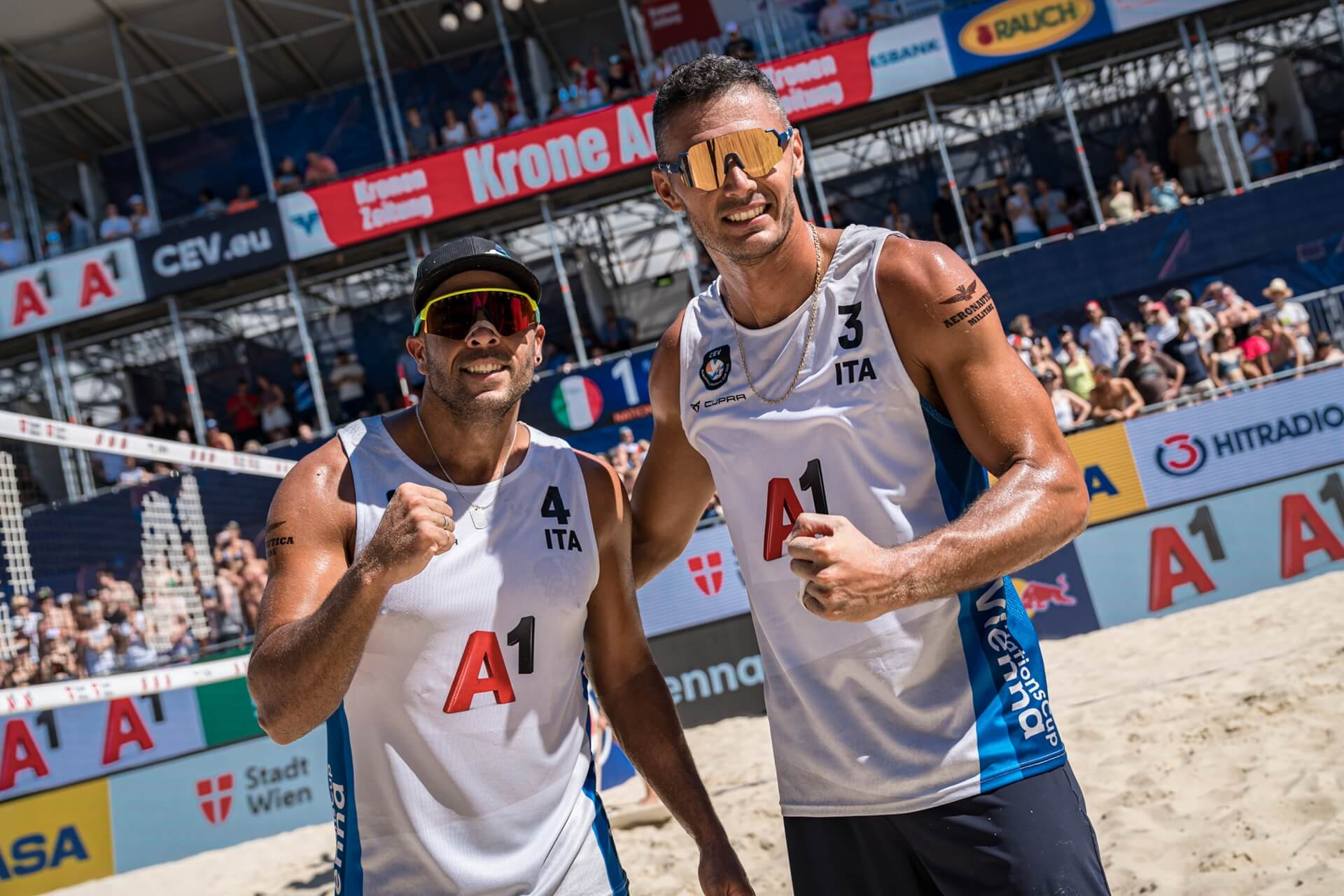