The Swiss women emerge as the winning nation of the A1 CEV BeachVolley Nation Cup 2022. Germany takes second place, Latvia is on the third podium.

Great final atmosphere on Saturday afternoon in the Red Bull Beach Arena: The women, more precisely Anouk Vergé-Dépré and Menia Bentele for Switzerland and Julia Sude and Karla Borger for Germany, played the first Gold Medal Match. The German women rode a strong attacking strategy from the start and took the lead.  Vergé-Dépré/Bentele took a timeout at 8:4 for Germany. With two consecutive ace services from Borger and a longline shot from Sude, the leading team picked up more points and left their Swiss opponents far behind. The leading ladies were able to show a 5-point advantage at the technical timeout at 13:8. The Germans pulled past the Swiss ladies with a flawless performance and moved towards their first set win. At 18:16, Borger/Sude allowed themselves another break. It got exciting once again towards the end of the first set when the Swiss women were able to catch up at 20:19. Nevertheless, Borger/Sude successfully took the first set victory with 21:19. 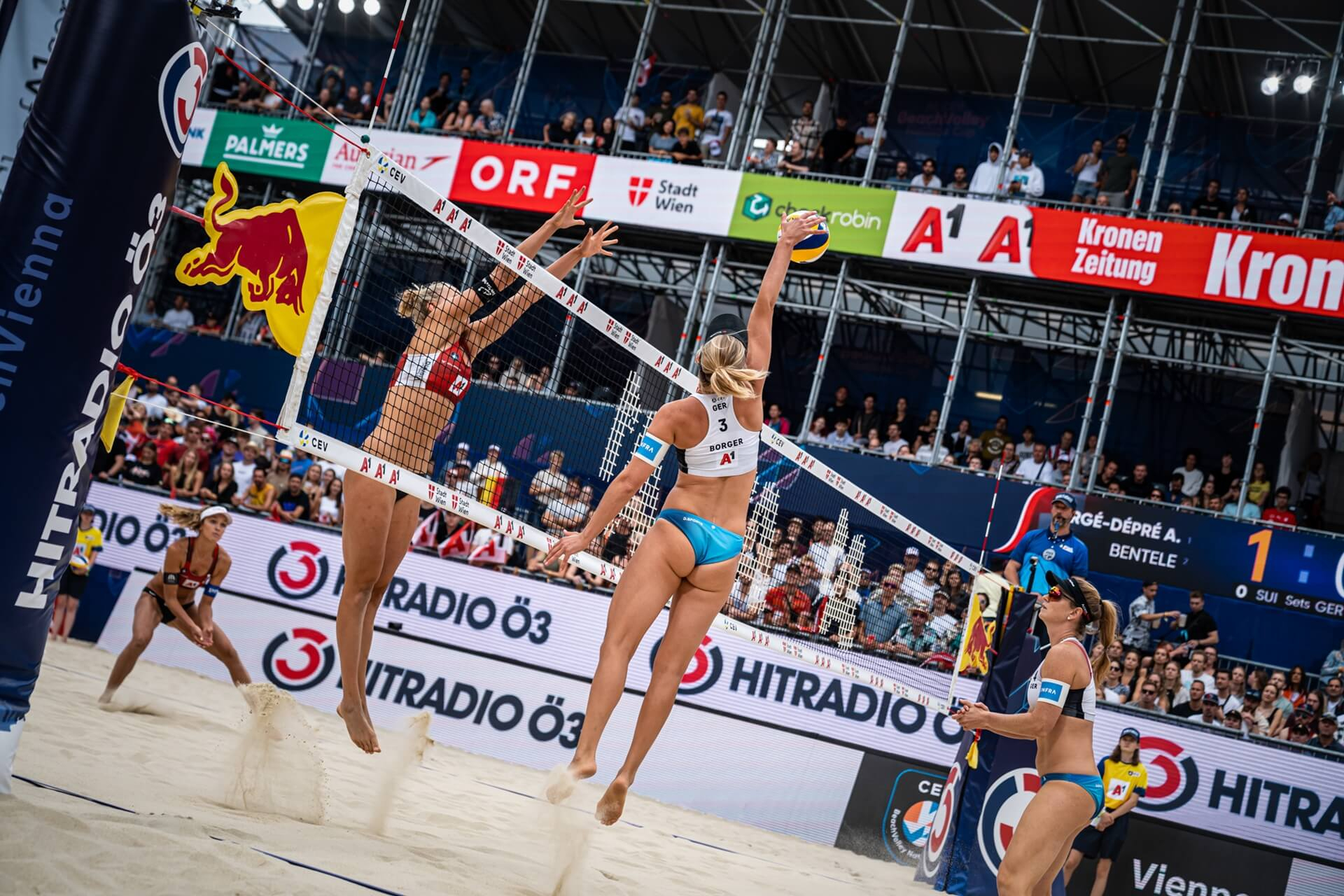 Right at the first point of the second set, the Swiss ladies objected to a block touch and asked for a video challenge, but it was to no avail. Our neighbors from the north took the reins in the second set as well and took a 5:2 lead. Time for a break for Switzerland. Germany was unimpressed by Switzerland's attacking attempts and continued to keep their noses in front. After the technical timeout, the German ladies claimed a challenge, a block touch by Bentele was suspected, rightly so. Another challenge was claimed at 15:10, this time by the Swiss due to a net error by Sude, also granted. Timeout for Germany at 15:12. It seemed as if the consultation with the coach had worked for the Swiss, they could reduce their deficit with a pokey and two shots to the longline to 19:16. Match point at 20:17 for Germany, Bentele defended well. The match win was due to a shot into the net by Bentele, who thus gave away the winning point to the German ladies. Final score: 21:19. 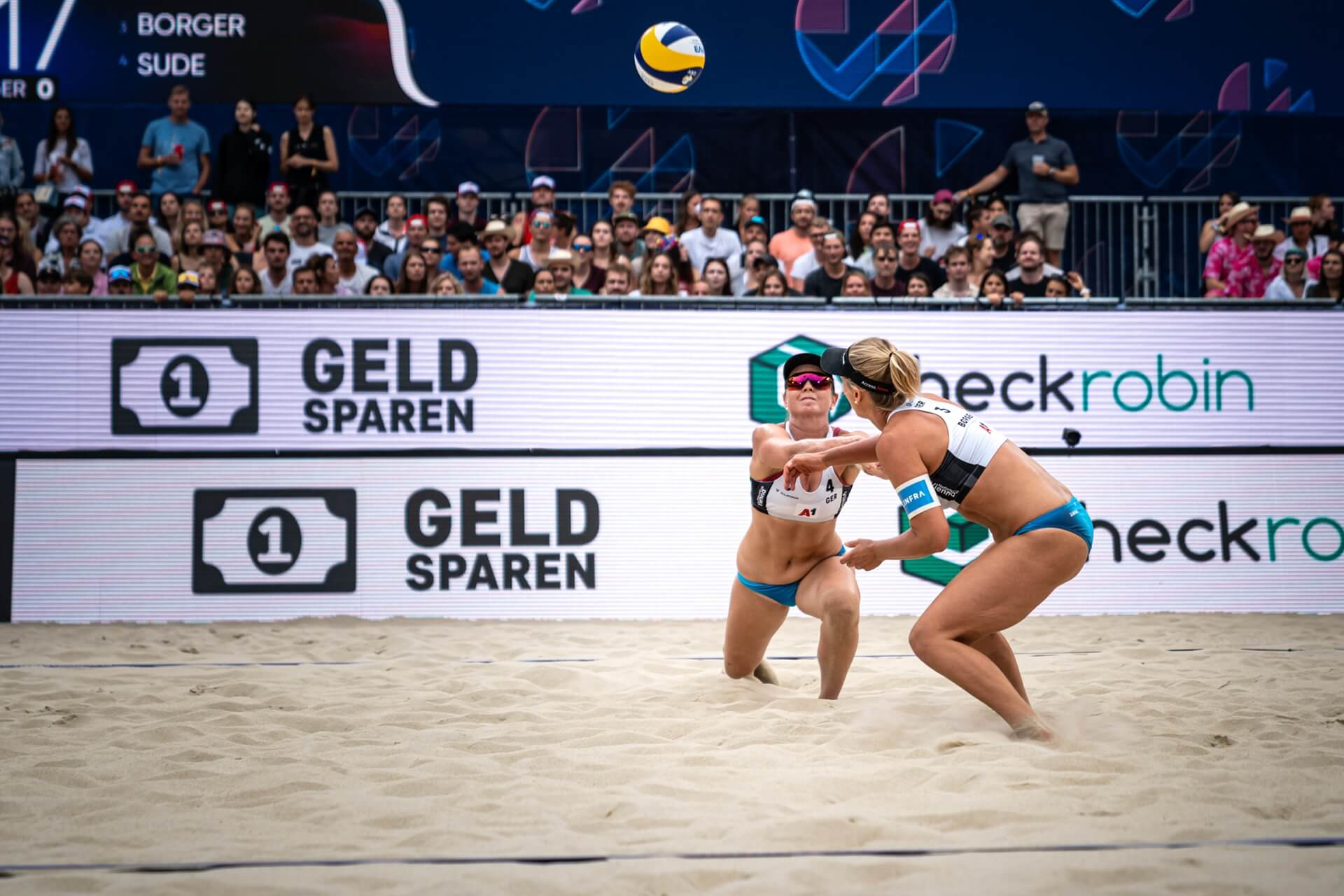 In the second match Tanja Hüberli and Nina Brunner had to prove themselves for Switzerland and Cinja Tillmann and Svenja Müller for Germany. In this match, Switzerland had one of the world's best block players Tanja Hüberli. The two teams started the first encounter evenly. Müller, also known for her impeccable services, allowed herself a small mistake which led to the equalizer for Germany at 7:7. The Swiss were able to overtake their opponents with their shots to the longline. Technical timeout at 12:10 for Hüberli/Brunner and strengthened from the break, they were able to extend their lead further to 16:11. The German ladies took a timeout and were able to reduce their deficit a bit. Challenge for Switzerland at 18:16, Svenja Müller was accused of a block touch - without success, was the result. The Swiss then took a timeout and immediately afterwards Hüberli shone in her master discipline, blocking. With a shot to the longline Brunner initiated the first set point for her own team at 20:17, but this was denied. The third set point was successful, however, and the set was won 21:18. 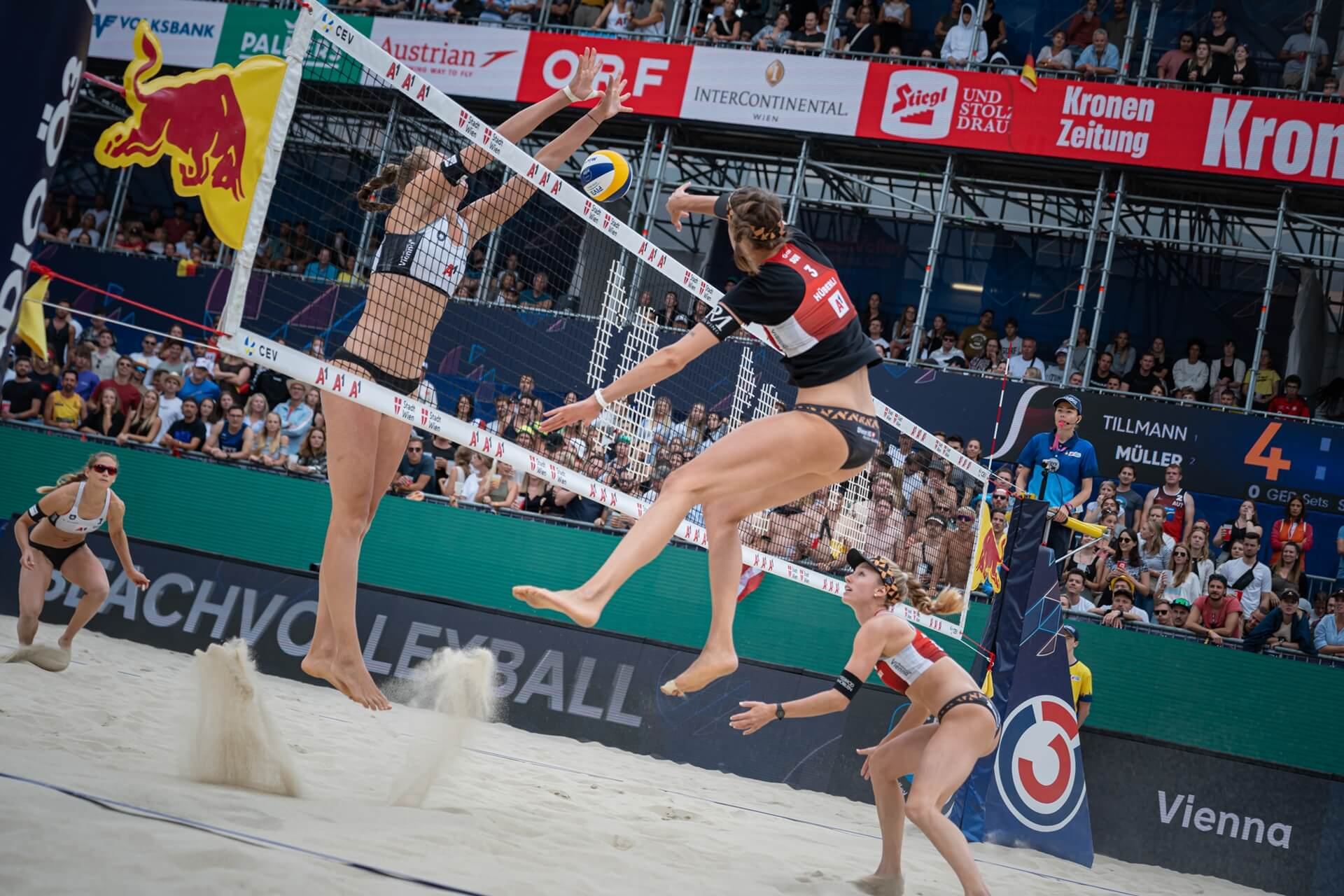 Pushed by winning the first set, the Swiss women started the next round and took the lead again. With a 3-point series in a row, the score showed 9:6 for Switzerland before the Germans claimed a timeout. Already at this point it became apparent that a golden set could not be ruled out. Technical timeout at 13:8 for Switzerland. Two valuable points were given away by Hüberli and thus she tied the score at 16:16. Müller gave the opponents the opportunity for the first match point by touching the net and Tillmann then handed it over with a shot into the net. The Swiss thus owned the second set and secured their second match win, setting up a golden set. 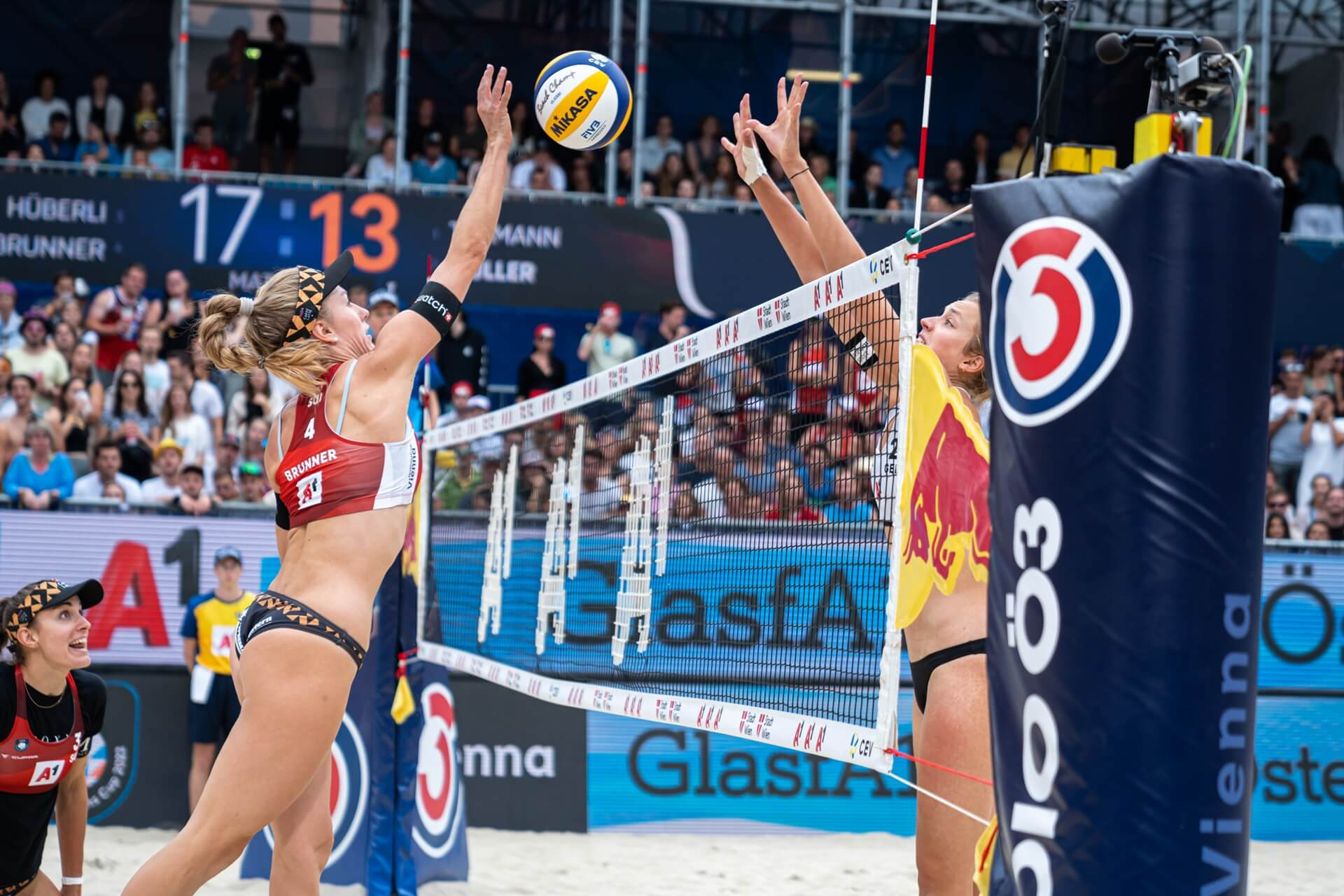 The already boiling atmosphere in the witches' cauldron suspected to boil over and an exciting match of the extra class was to be expected. A team change on Germany's side was decided by the coach. After a break, the experienced beach volleyballers Borger/Sude were allowed on the center court once again and fought against Hüberli/Brunner for the gold medal. The big tremor began: The two teams delivered an alternating exchange of points. Hüberli shone with her blocking skills and gave the Swiss women's team a lead at 7:5, which Borger/Sude took as a reason for a timeout. Sude showed her fighting spirit and attacked where she could. Nevertheless, the deficit could not be reduced. Switzerland continued to lead and initiated their first match point at 14:8, which succeeded right away thanks to a diagonal attack by Hüberli and gave them the victory. 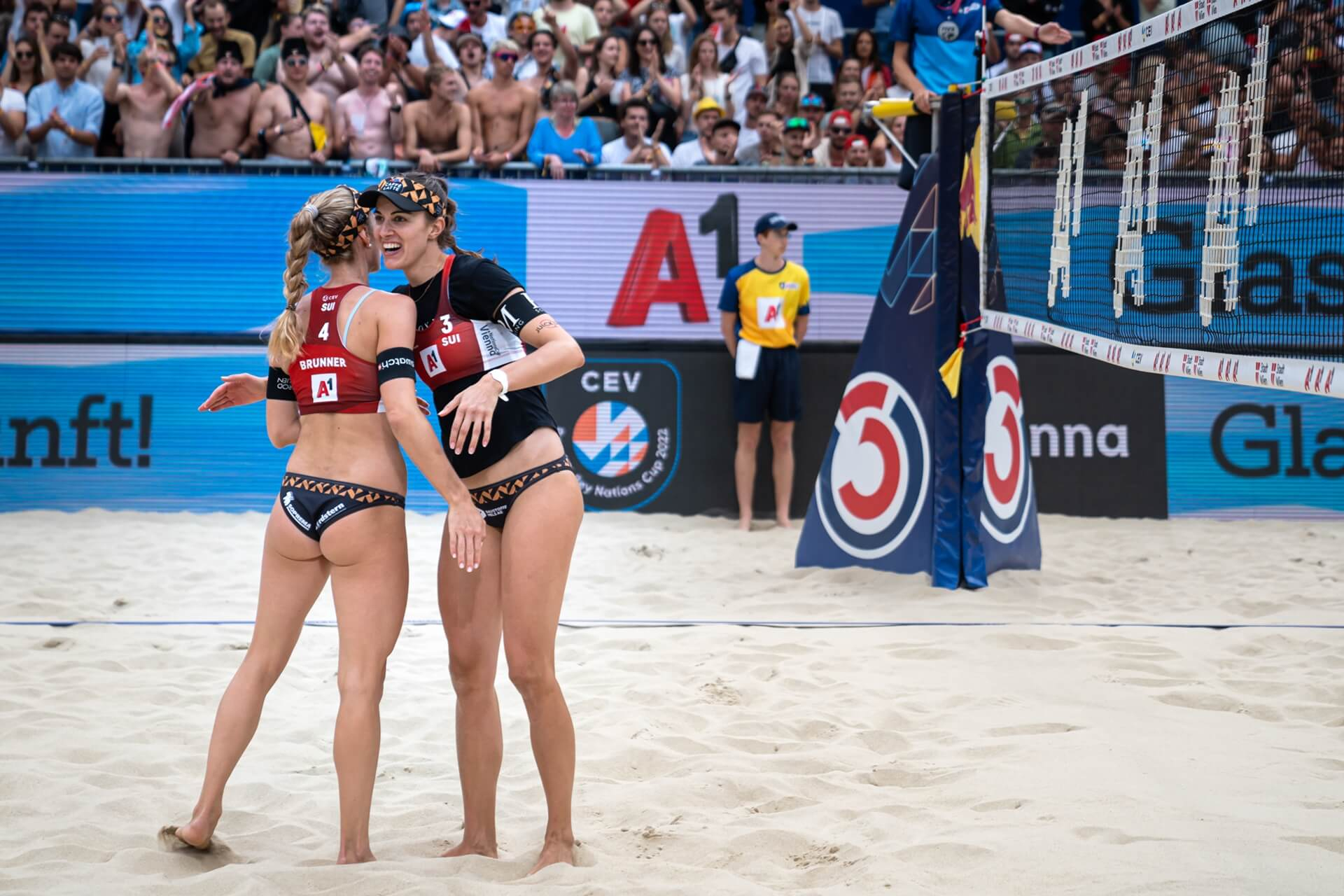 The Swiss women emerge as the winning nation of the A1 CEV BeachVolley Nation Cup 2022.