Four beach volleyball teams from Europe stepped on the podium of this weekend’s World Tour event in Sochi, Russia, and certainly the most satisfied of them were Polish Piotr Kantor and Bartosz Losiak, who won the men’s tournament in Russia.

The Poles, who both turned 29 earlier this month, came from behind to defeat Qataris Cherif Younousse and Ahmed Tijan 2-1 (17-21, 23-21, 15-10) in the final match of the four-star event in Russia. The result not only gave Kantor and Losiak their first World Tour victory since 2018 but also significantly improved their chances of qualifying for the Tokyo Olympics.

The Polish entered the tournament, the penultimate in the qualification period, outside of the top 15 of the Olympic rankings that secure their spots in Tokyo by 100 points. With their triumph, they moved to 14th place, building a 200-point advantage on both Latvia’s Aleksandrs Samoilovs/Janis Smedins and the Chilean cousins Marco and Esteban Grimalt, who will likely compete for the final berth in Ostrava, Czech Republic, next week.

“I have no words to say something more than that I am proud of our team and my partner,” Losiak commented. “It’s too early to say if we made it to the Olympics, but we made big steps and I hope we continue. We thank the Sochi spectators for the support and for the cheering. It was nice to be back and play in front of them.” 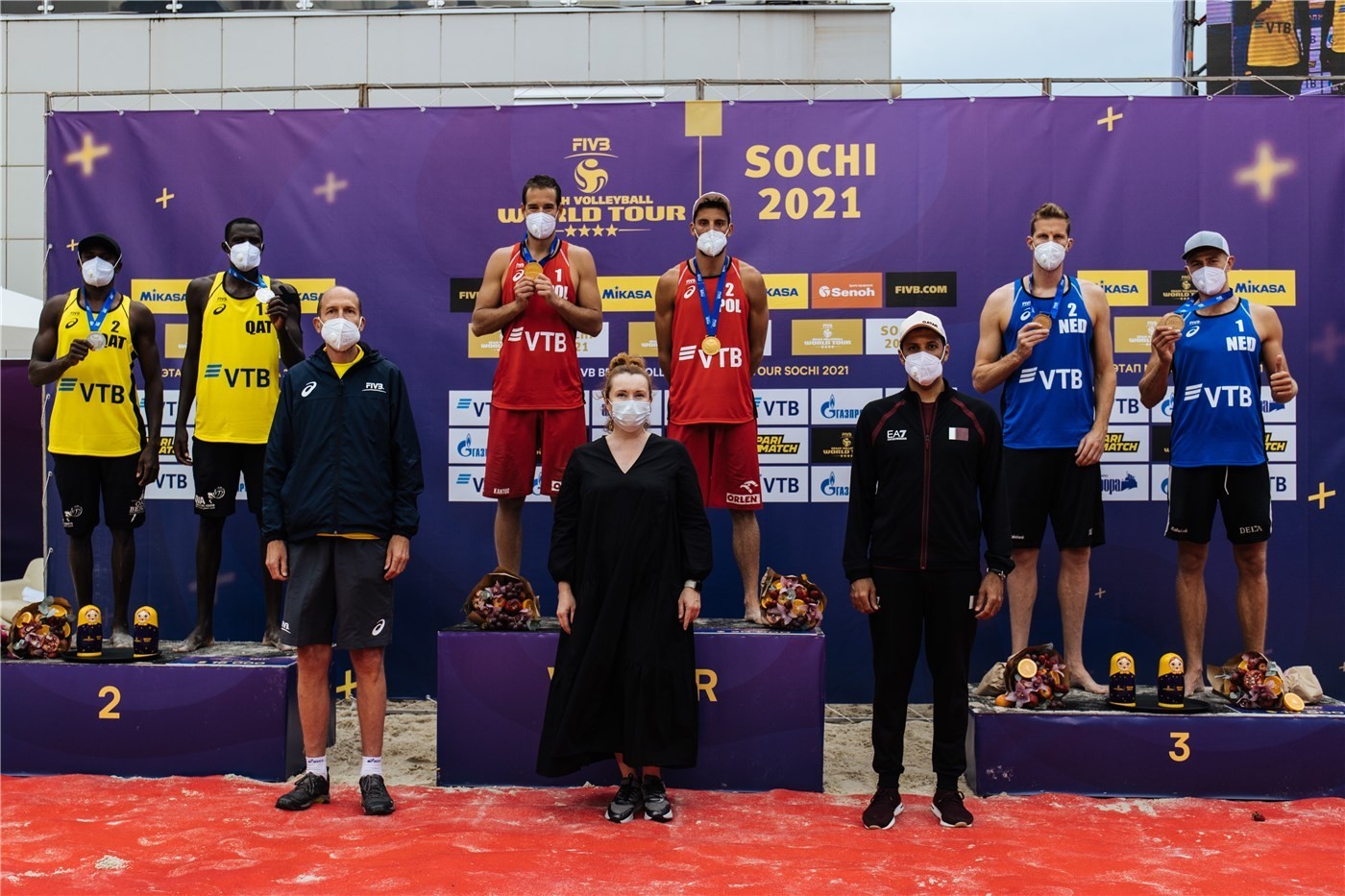 The bronze medal match of the men’s tournament was an all-European affair between the Netherlands’ Christiaan Varenhorst, a bronze medalist of the 2015 European Championship, and Steven van de Velde, and Italians Adrian Carambula, who took silver at the EuroBeachVolley also in 2015, and Enrico Rossi. The towering Dutch had the advantage and won 2-1 (21-16, 26-28, 15-9), claiming their second-ever World Tour bronze and keeping their dream of qualifying to Tokyo through the Olympic rankings alive.

The women’s tournament also had two European teams on the podium with second-placed Tanja Hüberli and Nina Betschart of Switzerland and third-placed Nadezda Makroguzova and Svetlana Kholomina of Russia flanking the champions, Americans Kelly Claes and Sarah Sponcil. 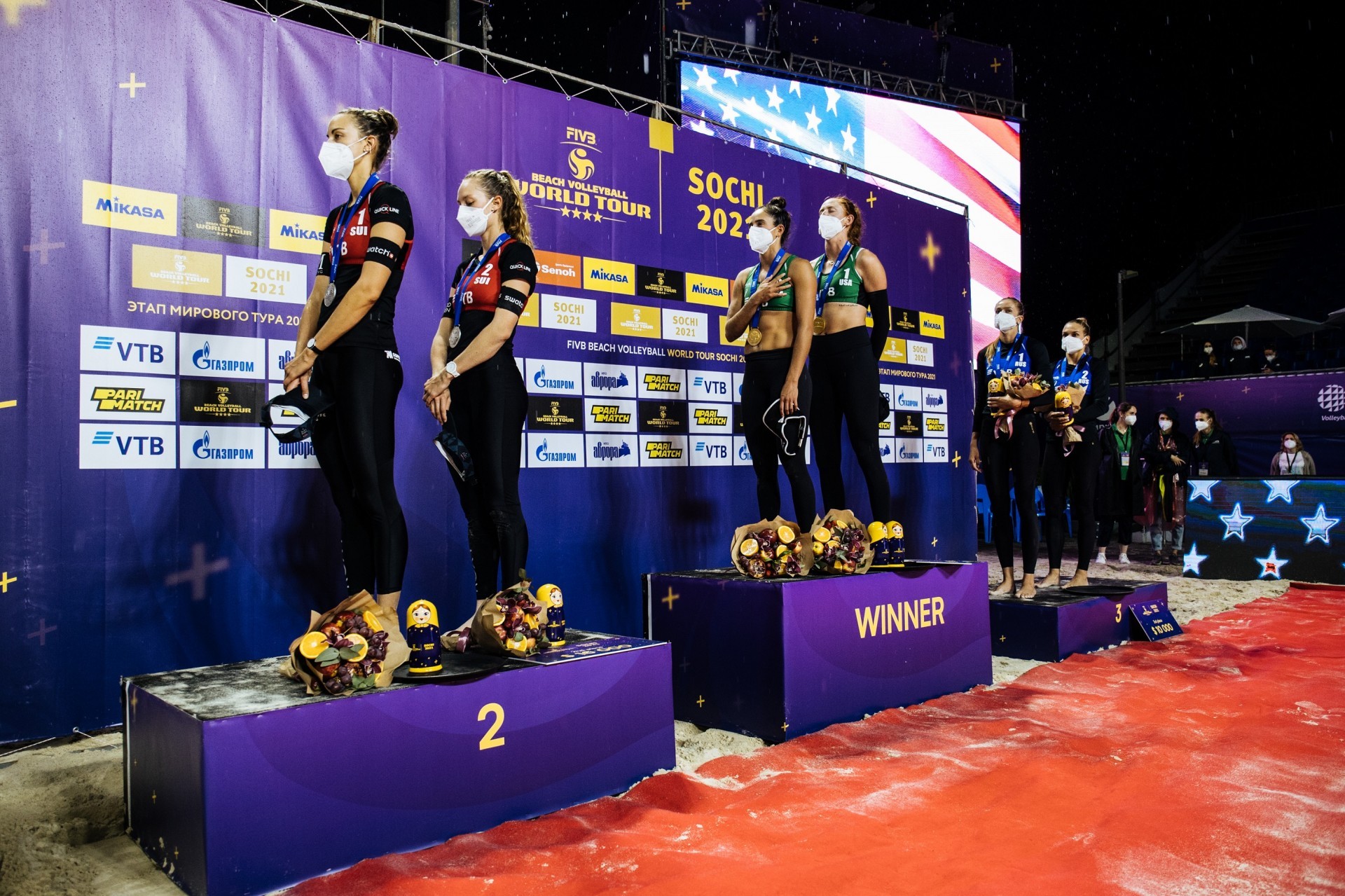 Claes and Sponcil, who passed Kerri Walsh Jennings and Brooke Sweat in the American Olympic race and are now close to securing their spots in Tokyo, downed the Swiss, who won silver at the 2018 edition of the European Championships, 2-0 (21-19, 21-17).

In the bronze medal match, Makroguzova and Kholomina, who were third at the 2020 edition of the European Championships, defeated the 2019 continental champions, Latvians Tina Graudina and Anastasija Kravcenoka 2-0 (21-18, 21-11).  All three European teams are guaranteed in the upcoming Olympics.

“It was our home tournament, so we needed a good result,” Makroguzova said. “We even went for the gold, but the bronze is also really good, because we played some very difficult games against some really good teams.”

The final event of the Olympic qualification period, another four-star, this one in Ostrava, the Czech Republic, starts on Tuesday.