An incredible match, for which we barely find words for - #goosebumpsdontlie

Two consecutive matches with Austrian line-up really heated up the Red Bull Beach Arena on Thursday afternoon. In the early evening, the second women's quarterfinal went over the stage, in which the Austrians had to prove their skills.

First, the Klinger sisters were sent into the match and faced the Dutch Van Driel E./Ypma on center court. Dorina Klinger, who freshly recovered from a stomach virus after her post-match collapse on Tuesday scored the deciding point to tie the match at 5:5 after the Dutch took  an initial lead in the ffirst set. Shortly after followed a technical timeout at 11:10. An ace service by Klinger R. provided the equalizing point at 12:12. With their egos pushed, the sibling duo managed to increase their lead to 13:12, which is why the Dutch ladies decided to take a timeout. With the Dutch women equalizing at 14:14, the two teams met on equal terms again. An exciting sideout by sideout followed. After another ace service by Klinger D., the Austrians managed to take a 2-point lead at 18:16. The mood of the raving fans in the packed stadium helped the hosts in the match to the first set point, which was initially fended off on the Dutch side. But on the second set point it worked out and our ladies took the first set win with a score of 21:19. 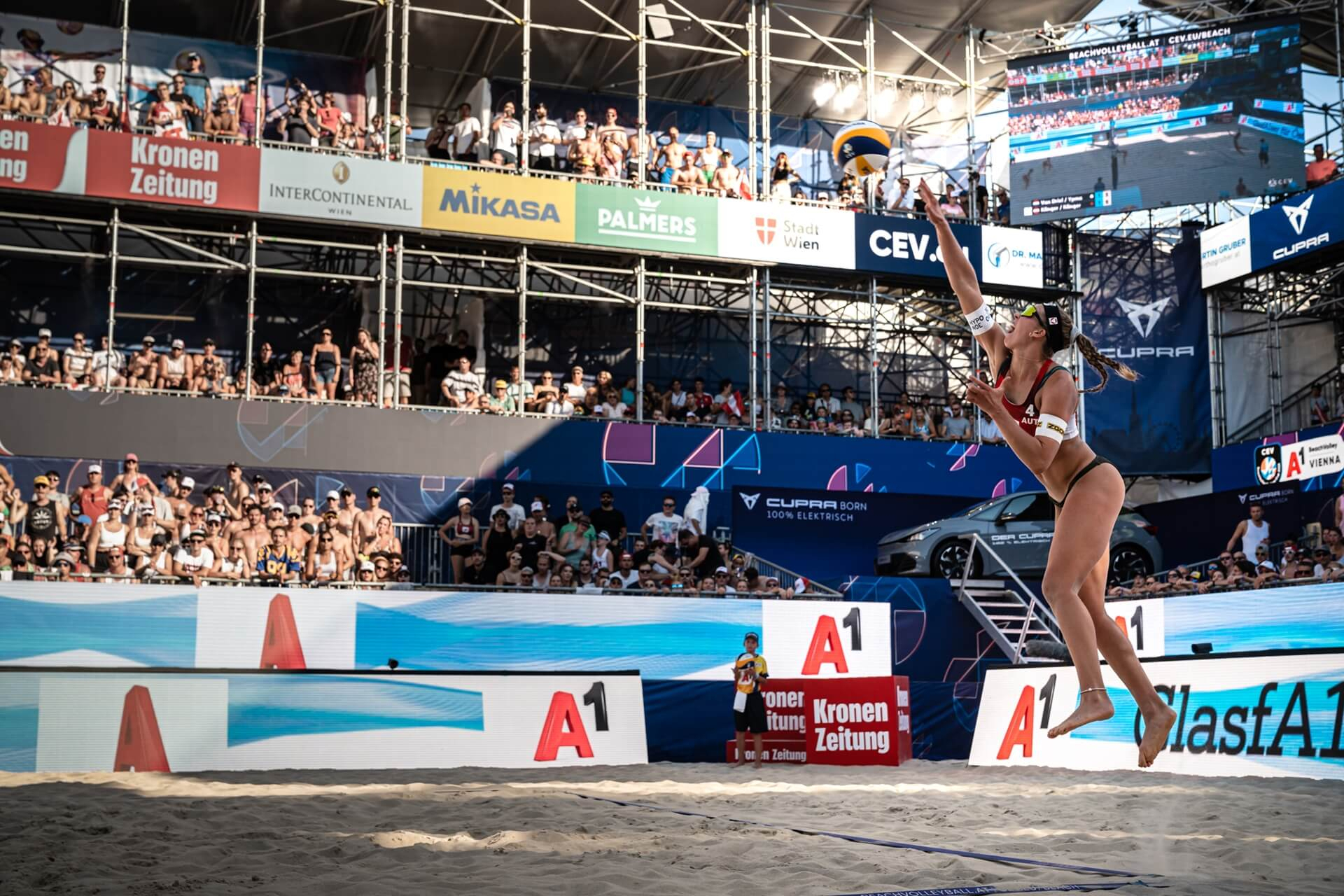 With an ace service Ronja started the second set with bravura. Our home ladies demanded a challenge after the service of the opponents was suspected in the out, but unfortunately to no avail. One point was given away to the Dutch. However, this did not affect the self-confidence of the ladies, as they shone immediately afterwards with strong actions and took the lead again. The score was 6:2, and the Dutch women called for a time-out. The short break did not lead to the desired turnaround, as the Klinger sisters continued to keep their noses in front. Another challenge was called at 8:5, but this time by the Dutch, who complained about a net error, which was granted. This gave rise to a short discussion with the referee for Klinger D. and the demand for another challenge, which, however, was unsuccessful and thus a point was given away to the opponents. After a tie at 9:9, the Klinger sisters took the lead again and at 11:10 the ladies went into technical timeout. A set of challenges, as it seems, because at point 11:11 again a video challenge was called by the Dutch women whether the service went into the out. Challenge rejected: The Austrians won one point. After a strong attack and a block by Ypma, the Dutch women caught up with the Austrians. Time for a timeout decided the sibling duo at 14:12 and a deficit of two points, which could be recovered afterwards. Tied at 14:14, the Dutch women caught up with the Austrian team. Team Austria demanded the challenge after a block by Ypma due to suspected net contact, unfortunately unsuccessfully. Van Driel E./Ypma were able to extend their lead to the first set point at 20:18, which was skillfully defended. Nevertheless, the Dutch managed the set point at the second try and took the win at 21:18. So the already goosebump-inducing match got a third set! 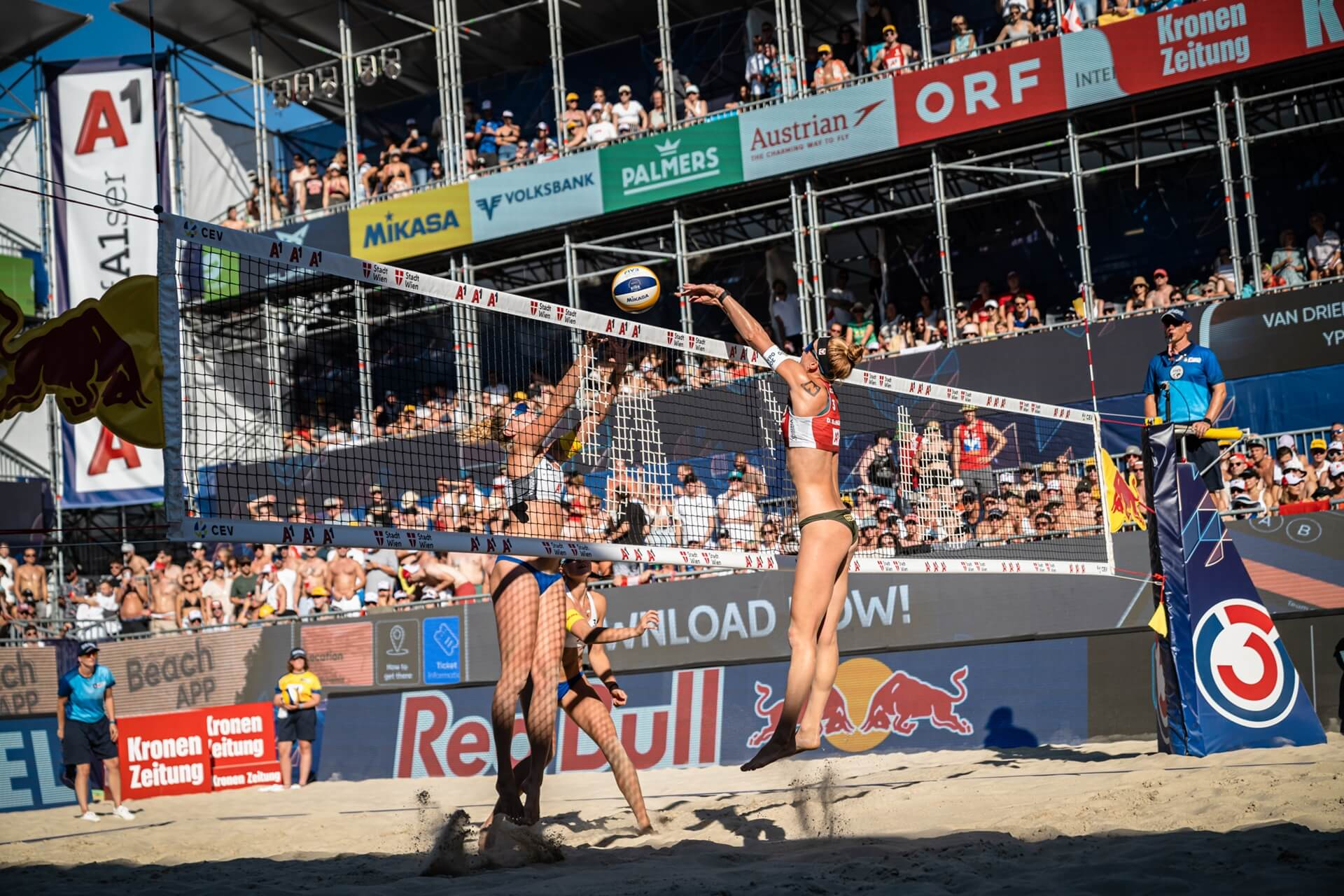 This one started evenly with a constant, alternating score. Nobody really managed to take the lead. Finally, after a block by Klinger D., the Austrians established a 2-point lead at 8:6. Van Driel E./Ypma called for a timeout when trailing by 3 points (10:7) and secured two points immediately afterwards. The Klinger sisters continued to give their all to not disappoint the raucous crowd in the stadium and regained the lead. After a net touch by Ypma and a shot into the net by Van Driel E., it came to set point. Done - and visibly relieved! The Klinger sisters secured the victory of the first match with a score of 15:9 after the third set.

A strong announcement by the Klinger sisters to their Austrian teammates Plesiutschnig/Schützenhöfer, which definitely puts a lot of pressure on them for the second match! They met Van Driel M./Piersma and started the first set evenly. The two teams alternated points until a score of 9:9, after which the Dutch ladies had their noses in front. Technical timeout followed at 11:10 for the Dutch, after which Plesiutschnig took points with two consecutive flawless services. Schützenhöfer also showed strong attacks to gain a lead at 15:14, and the Dutch women went into timeout. However, the lead remained with the Alpine women - audibly and visibly to the delight of the spectators. The equalizing point for the Dutch at 18:18. Austria called a time-out. With the score at 20:18 for the Dutch, the Austrian team called for a challenge, the question of "ball in/out" arose - rejected! The block of Van Driel M. secured the first set victory for the Dutch women.

The Dutch team started confidently into the second set, this did not leave the fighting nature of the two Austrians cold and after two strong services they caught up with their opponents again. The score was tied at 4:4 and the lead was 2 points at 8:6. An exciting exchange of points followed until the technical time-out at 11:10 for the Austrians. Two strong diagonal shots and a block on the Dutch side brought them back the advantage. Timeout for Austria at 13:11 for the Netherlands. The cheering crowd provided the necessary motivation for the Austrians, they fought their way back and equalized at 17:17. This prompted the Dutch women to call a timeout. Two tactically well solved shots earned the hosts two more points. They took the lead and had their first set point at 20:18 - but it was blocked. But the second one was well taken! Plesiutschnig/Schützenhöfer managed to win the set 21:19. 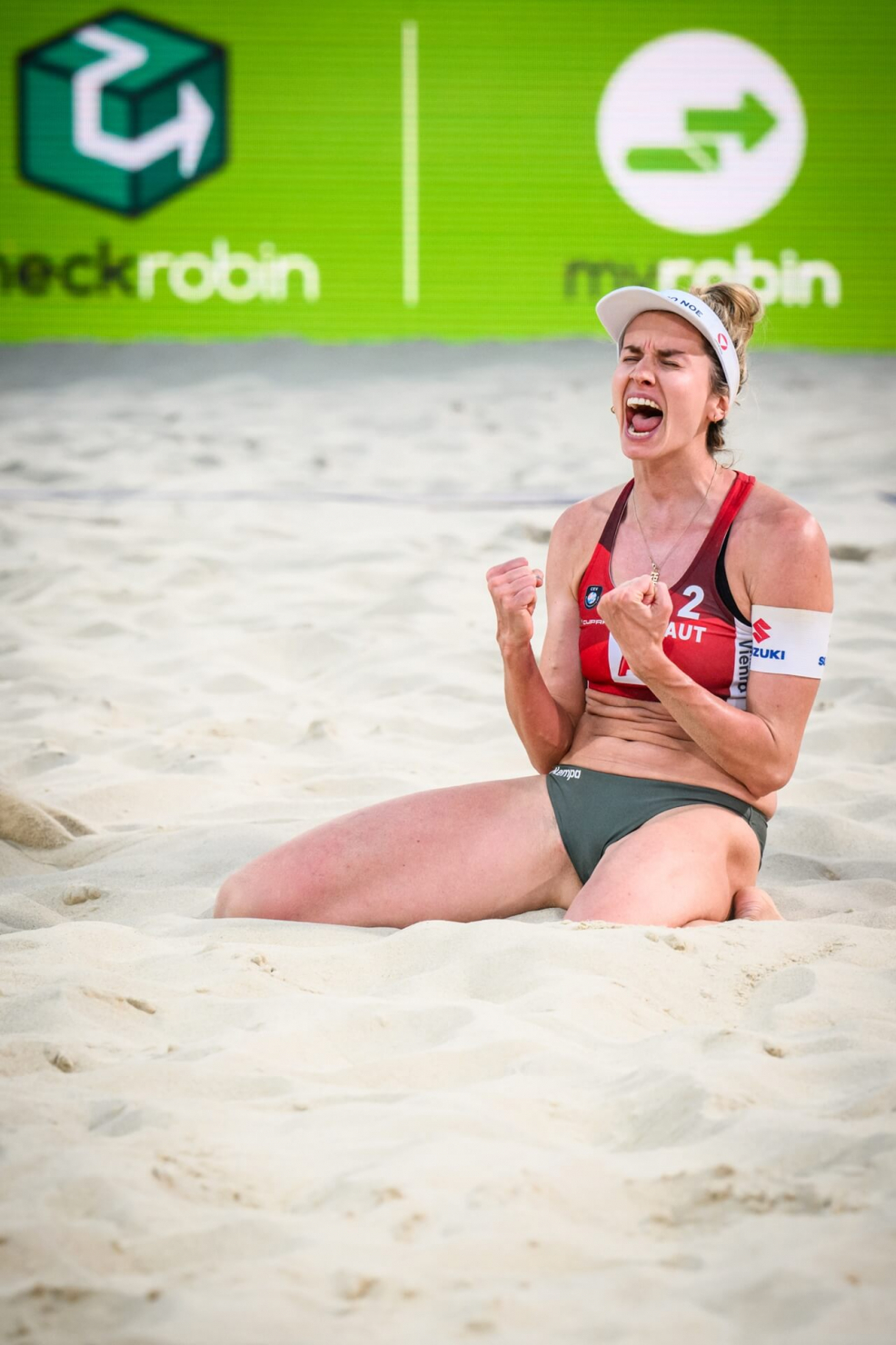 With a standing ovation and thunderous applause, the players were clapped into the third set. It remained exciting! #goosebumpsdontlie! A challenge was called by the Dutch team at 3:3, but again they asked for "ball in/out" - challenge unsuccessful was the result. Nevertheless they kept their nose in front. With the score at 7:5 for the Dutch, the Austrians took a time out and came back stronger, equalizing at 7:7. This challenged an alternating score on both sides. After a long rally, the Dutch took the lead at 10:9. Austria called for a challenge at 11:9, a block touch was suspected, incorrectly, because the challenge was unsuccessful and cost the Austrians a valuable point. All signs were already pointing to a golden set, which came true at set point 14:10, giving the Dutch the victory of the second match.

The coaches independently decided on the two second seeds, who played in the second match, for the all-important golden set in the second women's quarterfinal. Just under a five-minute break was given to the two teams before things got underway. Plesiutschnig/Schützenhöfer initiated the Golden Set confidently with three consecutive points. Too much of a good thing for the Dutchwomen, who called a timeout. The Austrians were able to extend their lead further to a score of 5:0, only after that their opponents found their way into the game and also got three consecutive points. Timout for Austria! A game of a special class was offered to the fans in the stands. With an ace service from Piersma, the Dutch equalized the score at 5:5. An exciting rally continued until the score was tied again at 8:8. The fans provided the necessary support for our red-white-red ladies when the Dutch took the lead. Equalization at 12:12. Plesiutschnig/Schützenhöfer asked for another "ball in/out" challenge, but it was unsuccessful. Courageous, because the score was now 13:12 for the Netherlands. The Austrians didn't let that sit and they managed the unbelievable in the last minutes of the game by making up the points and winning the Golden Set 15:13.

The joy of the four Austrian ladies was written all over their faces.  "In the end, I managed the block and Katharina defended insanely well. And you guys were insane. Thank you!" shouted Lena Plesiutschnig visibly relieved into the cheering crowd in the stadium. 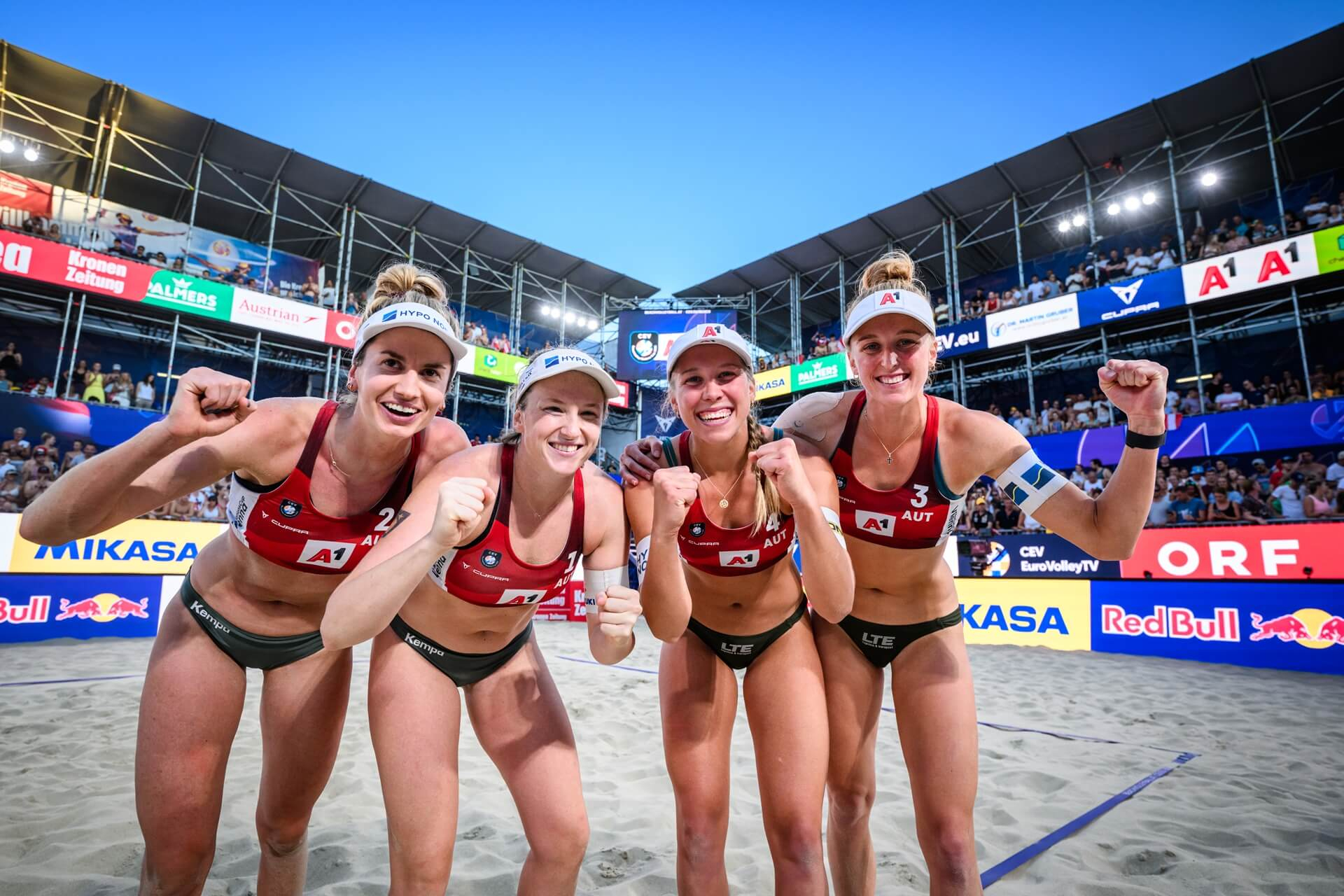