For the last time this year, the Red Bull Beach Arena filled up on Sunday for the all-important men's final day of the A1 CEV BeachVolley Nations Cup. The battle for the medals started with the duel for third place between Austria and the Netherlands. The local heroes were eager for bronze after the bitter elimination against Italy and for revenge after the 0:2 defeat against the Oranjes in the group phase.

The match of the second seeded team Ermacora / Pristauz started brilliantly. After a strong block and an ace by Moritz Pristauz, the Austrians quickly pulled ahead to 6:2. Varenhorst and Van De Velde, who were unbeaten so far, reacted and took an early timeout. The break had an effect on the Dutch and they came back with a strong service at 12:12. But the Austrians fought their way back into the lead, thanks mainly to an outstanding Martin Ermacora at the net. Several times the Oranjes despaired of the 28-year-old's block. The hard work of the red-white-red duo paid off, because at the decisive moment they had luck and secured the first set point with the help of a net roller. Ermacora / Pristauz won the first set 21:19.

Set number two began with some lack of concentration on both sides. Varenhorst / Van De Velde were quicker to shake off the brief lull and took the lead for the first time on the day. Only when the Austrians came back with two points in a row and the Netherlands took the time out, the pressure phase seemed to be over. With a sideout Ermacora / Pristauz equalised at 12:12 and with a subsequent ace by Pristauz they took the lead for the first time in the second set. The Austrians regained the momentum and defended their lead with everything they had until the end. With a 21:18, Ermacora / Pristauz also took the second set and gave Austria a 1:0 lead in the overall score. 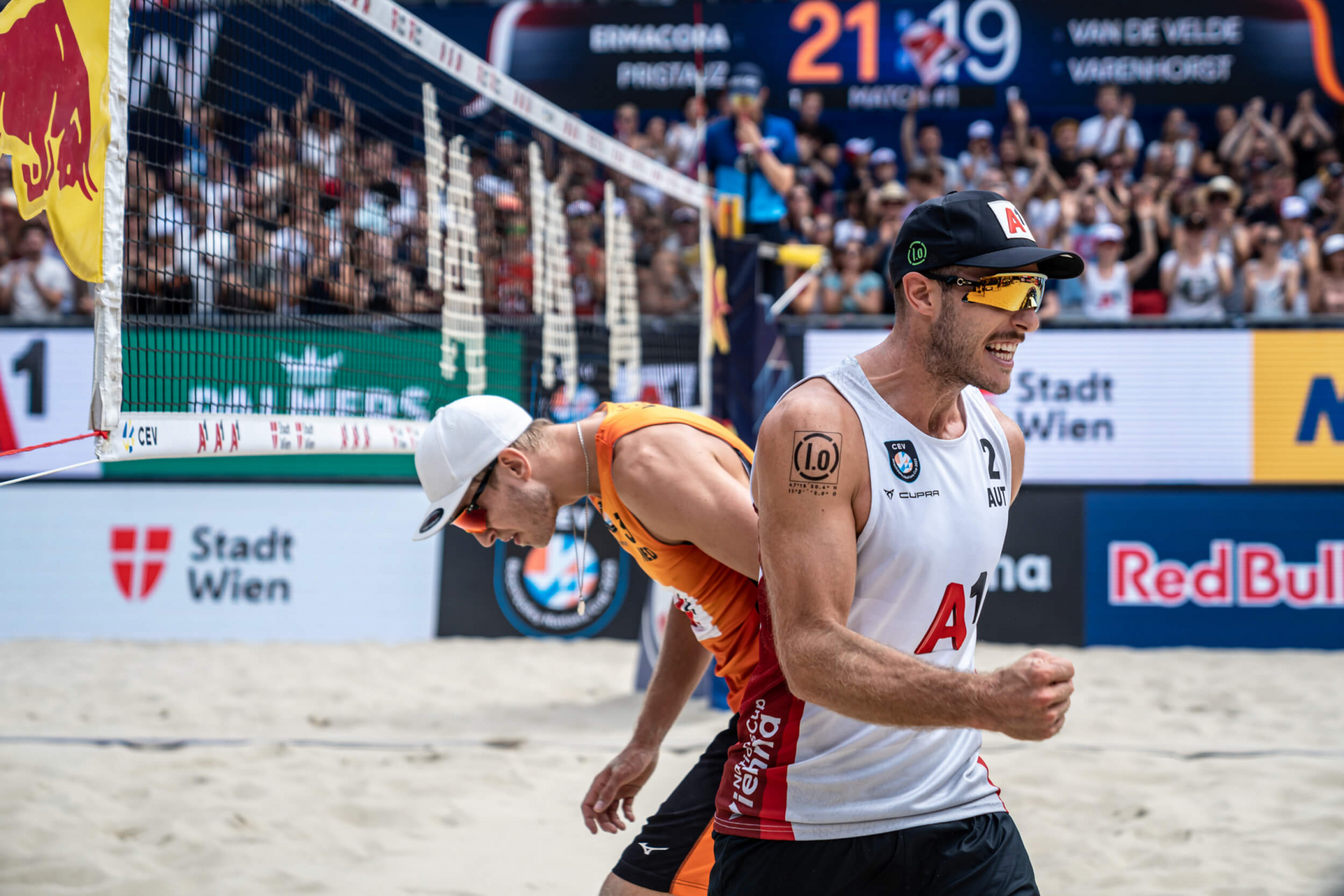 The door was wide open for a red-white-red medal party, but this door suddenly closed again in the top duel between Seidl / Waller and Brouwer / Meeuwsen. The local heroes, cheered on by the crowd, took the first lead in the match, but after that Brouwer / Meeuwsen clearly set the pace. Again and again, Alexander Meeuwsen's powerful attacks broke through the Austrians' defence. Even an elegant jump shot by Rob Seidl could not prevent a more significant deficit and the Netherlands pulled away to 20:14. Only for a short moment the Austrians' hopes came to light, but quickly disappeared again due to a mistake on their own serve. With 21:16, the Dutch took the lead for the first time and won the first set.

In the second set, Seidl / Waller could hardly counter the dominance of the very strong Brouwer / Meeuwsen. Although the Austrian duo was lucky with a net roller, their attacks were too weak and not precise enough to threaten the Dutch. On the other side, Robert Meeuwsen showed all his experience and not only reacted with decisive force in his spikes. During the Austrian counter-attack, he pulled his fingers away from the block at the right moment and sent Philipp Waller's shot out of bounds. Once again, Brouwer / Meeuwsen decided the showdown in their favour with 21:16 and thus equalised the overall score at 1:1. 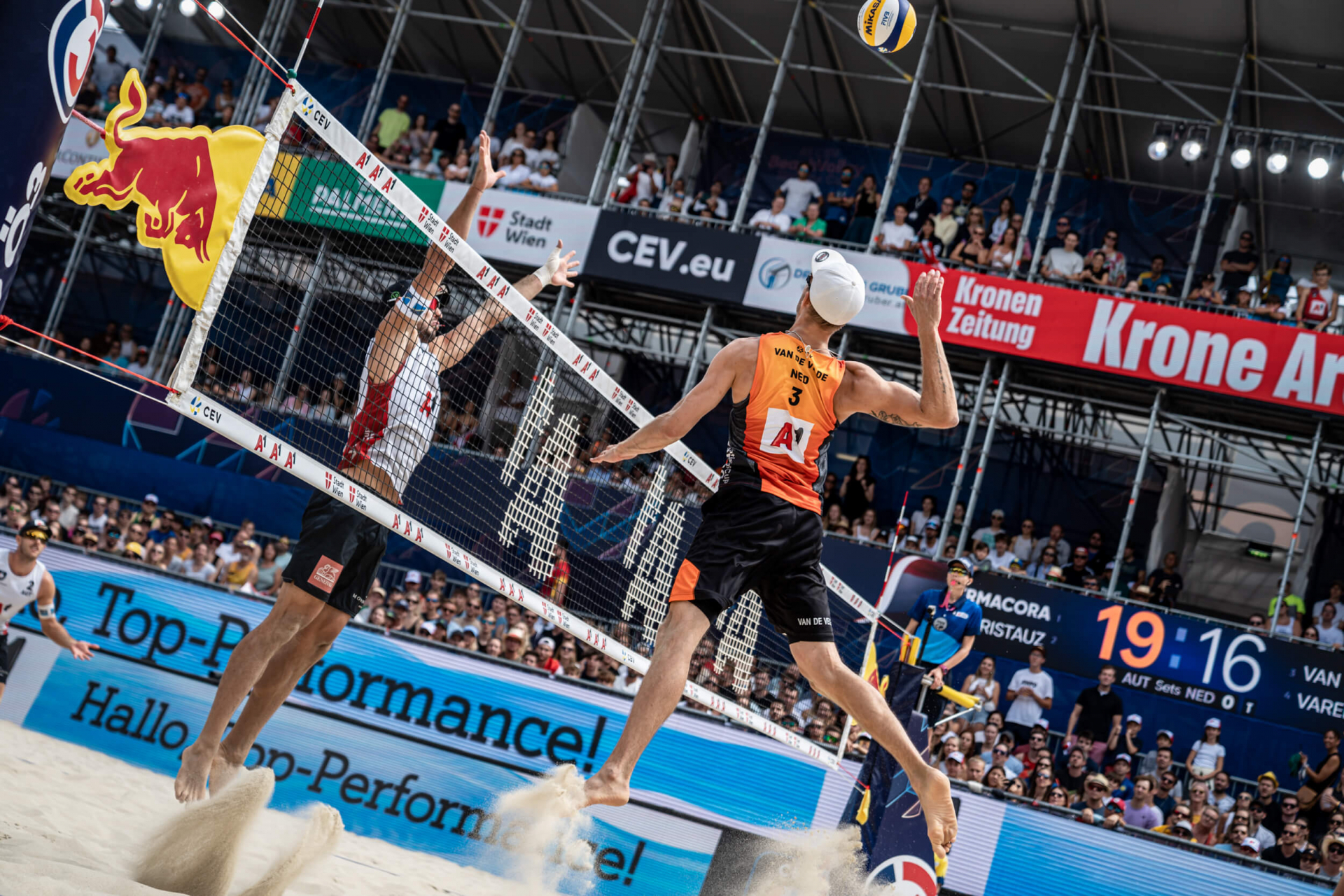 The bronze medal at the A1 CEV BeachVolley Nations Cup was decided in the golden set. The matchup was found soon and the two winning teams Ermacora / Pristauz and Brouwer / Meeuwsen fought for the triumph in the nations' duel.

Once again, the Oranjes took the lead and did not allow the Austrians to catch up after the intermediate 2:2 equaliser. An Austrian time out at the score of 3:7 made the Red Bull Beach Arena rise to strengthen the red-white-red crowd favourites once more. However, all attempts at an Austrian medal at the home tournament at the Heumarkt did not help any more. Brouwer / Meeuwsen were too powerful and ensured bronze for the Netherlands with a 15:8 success in the Golden Set.